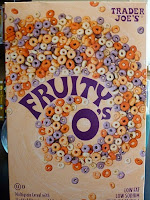 Yes, these are Trader Joe's Fruit Loops, for all intents and purposes. However, as one might have expected, TJ's left out the scary toxic neon colors, and the flavors come from actual fruits and vegetables. I guess they could have called them "Fruit and Vegetable O's" but that probably would have scared people off. I know I wouldn't have bought 'em.

The organic corn flour makes for one super-crunchy, roof-of-the-mouth-scratching "O." I'd say they're even firmer than actual Kellogg's Fruit Loops. And I've never been a fan of them for that reason. The taste of blood doesn't mix well with milk and cereal.

But for those of you with mouths of steel, this might be a decent breakfast treat for you. This cereal does accurately mimic the flavor of traditional fruit loops, although it's much less sugary and somewhat understated in comparison.

I really used to like the crazy neon milk left over from a bowl of Fruit Loops. The milk barely changes color at all with Trader Joe's version. Likewise, when you pick up the bowl to sip the milk right out of it, it actually tastes like milk rather than a melted milkshake dessert. But I guess that's a sign that it's healthy.

At nearly 34 years old, I suppose I should change my priorities and steer clear of the whole "asking for diabetes" thing and drinking carcinogenic dyes from a cereal bowl. I grew out of Saturday morning cartoons recently, but that's only because the ones they show now suck compared to the stuff we grew up with in the 80's.

Sonia has always been a bigger fan of fruit loops than I have, so I expected her to rave about these things, but she gave a lackluster reaction and shrugged her shoulders when she tried them. However, they kind of grew on her by the end of the bowl, and she settled on a dignified 3.5 star score.

Overall, this cereal's not bad. But if you want a few recommendations for cereals that really wowed us, check out our reviews of Organic Mango Passion Granola and Maple Brown Sugar Mini Wheats.

I give the Fruity O's 3 stars.