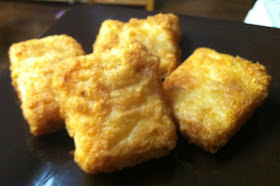 Right in the basement below Sandy's job, there's the college campus greasy spoon/student hang out cafe. Every day when I pick her and Baby M up to go home, I must get there right at the time when they're venting out all the deep fryers or something, because man, that tasty greasy aroma just spills out over the whole parking lot and sneaks right up my sniffer. Most of the time, I'll admit it, it smells gooooood, to the point that Sandy and I comment about it at some length as we're packing up the Tucson. You don't have to sell me on the horrors of greasy fast food - I've seen firsthand what it does to my body, and I've worked at McDonald's and gagged near enough grease buckets to know how foul it is behind the scenes -but man, that good greasy aroma? It must hit whatever evolutionary triggers I have left that beckon me towards fat and calories and comfort and whatever else for self-preservation (even though, ironically, it has quite the opposite effect these days). 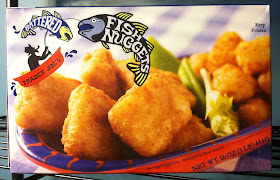 Fortunately, I can avoid the grease pretty well these days. It's a work in progress, admittedly, but the results so far have been fantastic (about 30 pounds lost this year!). But also fortunately, when the mood hits and I need me a fix, there's good, relatively healthy/not-as-bad options like Trader Joe's Battered Fish Nuggets out there.

These are not your high school cafe's fish squares. I absolutely love the fact that I can bake these in the oven (admittedly, after spraying the sheet with a little PAM, like the directions say to), but they taste like they're straight from the fryer basket. The batter is the thick kind that as it bakes it crisps all up while keeping the middles perfect. A few extra minutes in the oven, and the nugget batter gets even a little extra crunchy. Most importantly, they taste and even feel a little greasy, but the nuggets really aren't all that much. It's a fishy fake out that fools me pretty well. The pesce piece itself is a pretty typical white fish, pollock, which tastes clean and not too fishy, which is appreciated. Even with the aforementioned extra bake time, the outcome was flaky, not-exactly-dry, not-exactly moist nugget innards. Delishy fishy indeed.

I just so happen to think they're darn near perfect. Condimentally speaking, I'm a hot sauce guy, which made a great accompaniment for the fish nuggets, and I can imagine they'd pair well with whatever your sauce of choice is. Plus, at $3.99 for the box, it's a decent value for two dinners for the wife and me. Sandy said she'll give 'em a four, and I'm disappointed she didn't say much else so I can poke some light fun at her as I usually do. Next time, I hope. I'll go 4.5.