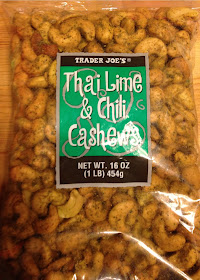 I'll admit it: Sandy and I bought this bag of Trader Joe's Thai Lime & Chili Cashews fully expecting to not like them. I do that sometimes, for the sake of the blog, otherwise we'd never review ca-taste-trophes like the meatloaf muffins or the watered down raccoon p...I mean Name Tag lager. You see, years ago, well before becoming a TJ's regular, I happened to stroll in one day to see what the big fuss was about TJ's, saw these and bought them, gagged on the first handful, and promptly returned them, and didn't really come back to the store 'til a few years later. I had kinda forgotten about them, but then my folks, who've become recent TJ regulars themselves, made the same rookie mistake I did, bought them, hated them, and returned them right away, and made sure I knew about it. I figured it'd be worth the time and obliterated taste buds to revisit this bag o' nuts, if for no other reason to spread the word about their grotesque existence, and maybe indirectly get TJ's to spend their precious shelf space on some other worthy snacky food.  Doing that based off a five year old memory wouldn't be fair, hence our purchase. I think I even talked Sandy into them by saying we'd buy them, be grossed out, return them and then go get ice cream with our returned dollars.

But a funny thing happened: Sandy ripped the bag open, popped one or two in her mouth, and then kept going back for more and more. "Mmmmm," she said, unbelievably to me. "I like 'em." So, I grabbed a few myself.

Surprisingly....they're not bad. Granted, they're hotter than a pair of sweat pants full of barbeque, so their appeal to the general population may be somewhat limited. That "lime" you see in the title? If you were expecting these cashews to be mostly lime flavored with a little Thai spice, or perhaps offer some relief from the heat (like, say, bleu cheese dip for some hot wings), you're about to be very gravely mistaken. The lime is very, very, very subtle. The packaging says it has something to do with the lime leaves it comes from, or something like that. What's not subtle at all is the literal barrage of Thai chili seasoning coming from each and every nut. It's unrelenting. It's liberally dusted over each nut, and by the end of your snack it will not only cover your fingers but also seemingly every bit of your existence. Behold the power of Thai chili, and have water nearby just in case. If you do not absolutely love very spicy Thai food, you stand no chance of liking these whatsoever. Buy carefully. 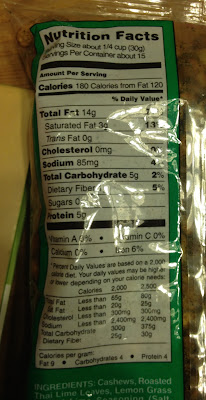 If I recall correctly, I didn't like them years ago because they were way-off-the-chart-too-spicy, even for me back in my younger days. I phrase it that way, because I used to be able to eat a habenero and not even wince, and these days, on the other side of 30 with a wife, kid, mortgage, full-fledged bald spot and regular chiropractic appointments, anything much more than Frank's Red Hot make me want to take a knee for a spell. So either these have toned down over the years, or there's some part of me wishing desperately to ignore all the radio ads about my supposedly declining testosterone and to hold on to the days of my youth, and for whatever reason this has all subconsciously manifested into a newfound tolerance for a sack full of spicy nuts. Or maybe I just don't want to look like a sissy next to my wife. Not sure.

They're $6.99 for the pound, which isn't too bad for cashews these days. And while they're not something we'll inhale, or even necessarily buy all that often, they're good enough for the occasional handful. We'll have to finance our next ice cream trip thru different means after all. Sandy does seem to enjoy them a smidge more than me, and I like them to the tune of about three Golden Spoons, so add half of one for her.