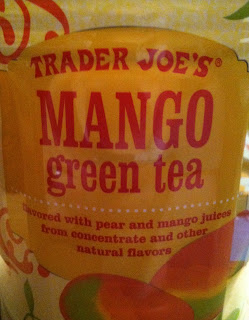 I've probably written this before, but green tea is one of those things that can easily go either way for me. Sometimes it's cool and refreshing (or warm and welcoming), but other times, if it's a bit too herbaceous, well, it tastes like a puddle I could've lapped up from my lawn after a storm. Minus the mud. Overall, I can't decide if green tea is something I like or not. It's kinda the same with mangoes, too. Mango products I've reviewed have typically done well on here (like the granola or these candies) but fresh mango? I've tried to like it, but there's just somethng a little off about it that I don't really like, which is odd because pretty much any other fresh fruit gets a free pass. Except bananas. Don't get me started on those.

So, here's Trader Joe's Mango Green Tea. Two things I like to be wishy-washy about combined into one product. Wonderful. You can probably figure where this is headed. One word of advice right off the bat: be sure to shake this pretty well, or it just tastes like some two-toned flat-out nasty juice. I made that mistake once, and once was enough. 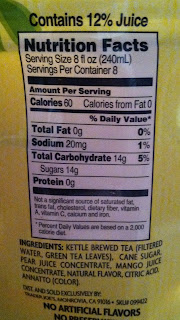 What if well-shaken and well-chilled? Hmm. Depends on the context, methinks. Any flavor it has is pretty subtle. To be honest, what I tasted mostly was the pear juice they stuck in as a flavor filler. The green tea portion isn't too potent at all, which is appreciated, while the mango isn't too overpowering. The label says there's 14 grams of sugar per one cup serving, which seems like a ludicrous number, not as much for the nutritional aspect as...I would've guessed 2 or 3 grams, tops, because sugary and sweet are two words I definitely would not use to describe the tea. When chilled, it actually really doesn't like much at all - it kinda has to warm up a bit, and that's when it becomes a bit more flavorful, but not by leaps and bounds.

I said what I said about context because it was a welcome refreshment from our dinner last night. On the advice of several readers, I took our remaining Thai chili lime cashews and some dried green mango and tossed them into TJ's yellow curry sauce (I reviewed the red a while back) with some rice. Deeeeeeeeeeeeelish! But pretty spicy, so having some mango green tea on standby for fire duty was pretty welcome. Other times, though, when I've sipped some just to have a drink, I've come away not so impressed. Sandy's pretty much in the latter category. "Meh. Meh. Mehmehmehmeh. It tastes like nothing," she said. "Meh again." Yeah, that sounds about right to me. With a little more flavor (I'd vote for mango), this would be pretty fabulous. As is, meh resounds within me as well. Split our score as you see fit.