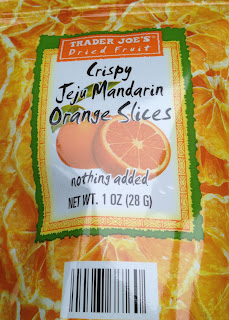 How long does a bag of mandarins or clementines last in your house? Around these parts, not long at all. The wife and I can inhale a two pound bag in literally a day. It must be our completely irrational fear of scurvy. As an aside, we have to save one for Baby M, who loves holding one in her little hands as she tries to impersonate the two of us by trying to cram it into mouth. Like father, like daughter, I guess. Scary thought. She literally held one for hours at school one day until a bigger kid came by, swiped it, and chomped it as Baby M burst into tears. If someone stole my little orange, I'd have much the same reaction.

Anyways, when I see the words "crispy" and "Mandarin orange," my mind automatically inserts the word "chicken." So it's a little jarring to see the full name, Trader Joe's Crispy Jeju Mandarin Orange Slices, and know it's an obviously orangey poultry-free product. In case you whiff on this observation, TJ's conveniently slapped on the phrase "nothing added". No, friends, what's about to go down is a crispy orange slice, in all its crispy orange slice glory, and there's nothing to add or subtract from that. 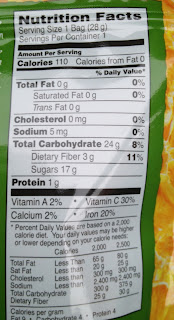 Except the juiciness, naturally. Texturally and sensorially, the orange slices are kinda bizarre at first. Visually, they look like something you'd find in a potpurri jar. Imagine leaving an orange slice in the desert sun for a week or two, and coming back and finding a withered skin-frame of what used to be a regular mandarin orange slice. That's about what they look like, and kinda what they crunch like, too. Each bit is light, airy, and definitely crispy, like a potato chip but much lighter, like crispy paper, perhaps. It's strange until you get used to it.

What it doesn't lose is taste. Despite the abject absence of any water, the orange slices still maintain a lot of the citrusy acidic bite. Some were even downright tart. Once I got used to the texture and mouthfeel of these lil' buggers, I could begin to really enjoy the taste. Unfortunately, that's also just about when the bag ran out.

The crispy oranges made an interesting little snack for the drive home post-work and shopping/pre-exercise/dinner/baby caretaking evening. Sandy's pretty hyped on the idea of getting them again before having guests over, to try and fool them into thinking we eat potpurri. Other than that, she stated she wasn't sure if she'd buy them again. I think it's because ultimately there isn't much substance to them. That's also my knock aganst 'em, though the edible potpurri shenanigans sound good to me. Sandy says a three. I say they deserve better, just for being willing to be a little weird, so a four from me.