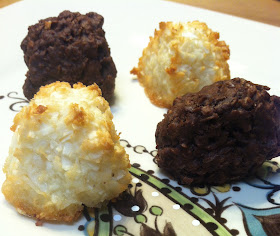 Yeesh. It's been one of those weeks. Maybe you can relate. Baby M's been up pretty much all night every night screaming unless she's been held. I guess I'd be the same way if I had a passing tummy bug while (probably) teething and a much-worse-than-usual diaper rash. For a recent three night stretch, I got a total of maybe about 7 hours of sleep, which I'd complain more about except that's more than my poor wife, who also doesn't have the luxury of sitting in a cubicle sipping coffee for a living like I do. Combine that with this being the week that we're beginning to get serious about getting ready to put our little house on the market, so there's a whole list of things to do and stuff to buy from Home Depot. I get lost in there, which only adds to the time. That and work and family in town (great to see you, Aunt Alice et al!) and yeah...I guess we shouldn't be too terribly surprised that Sandy and I forgot we even had these from a shopping trip a couple weeks back, until we decided we needed some sugary motivation for yet another late-night-baby's-maybe-sleeping cleaning rampage. Most normal weeks, we'd be all over these. 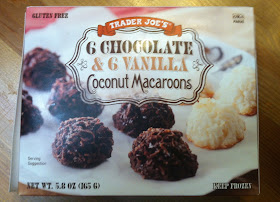 So, Trader Joe's 6 Chocolate and 6 Vanilla Coconut Macaroons. No, there's neither six types of chocolate nor six types of vanilla contained in each macaroon. That'd be a record. The macaroons are another one of TJ's frozen sit-and-thaw dessert types which have a little bit of mixed success with us, and honestly, I'm not up on my macaroon maintenance methods and whatnot, so I'm not sure why they're frozen to begin with. Seems to me they'd be shelf-stable enough. Anyways, as a concoction requiring thaw time, the macaroons are finally fit for consumption after forty minutes of sweating it out at room temp. Fortunately, that gave us a set deadline for fiddling with our bedroom laundry again. That part's the worst.

So, finally it was time to scarf them down. And yeah, we did. But to be honest, we weren't too impressed by them. As a helpful guide, the nutrition label states a serving of these consists of one chocolate and one vanilla macaroon....have mercy if you ate two of one flavor, apparently. So that's we each had. I liked the chocolate one a little bit better - they're not exactly straight-up dark chocolate, but the flavor tilts more that way than milk chocolate, for sure. Maybe it was the novelty of probably my first-ever chocolate macaroon. Conversely, Sandy enjoyed the vanilla a little more, which pretty much taste like, well, vanilla. Naturally, each had plenty of shredded coconut, and probably too much sugar, and were fairly soft and texturally pleasing, if still a little chilly. They're certainly rich enough that I was pretty satisfied with stopping at two.

Sandy and I "playfight" as we call it. We rarely argue, but if there's a point we want to be made to one another, we usually get a little sarcastic, make fun of each other, say whatever it is, make more fun of each other, and usually laugh along the way and work it out. That was kinda our night while cleaning our room (adding in gently throwing a Beanie Baby platypus at each other), so it wasn't surprising that before I had a chance to ask my lovely wife her score, she looked at me and started doing her "Russ impersonation" - namely, making a stupid looking face, lowering her voice and mumbling something. It's surprisingly accurate. In her Russ-voice while making her Russ-face, she mumbled something like "Oh they're okay I guess, they're not bad. I've had better...uhhh...maybe I didn't really like them....uhh, maybe I did...uhhhh, since you know all about macaroons and (stuff), what did you think?" She settled on a 3.5 for them, adding that she likes the plain ones with maraschino cherries you can find at most grocery stores better than these. I'm not swayed one way or the other by them, so right down the middle for me.