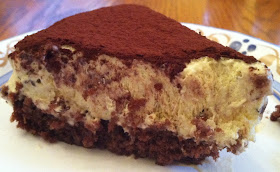 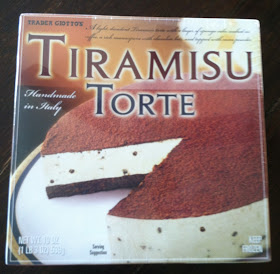 As does tiramisu. Now, I've had tiramisu plenty of times. I'd wager that I've had some not-so-good, some average-to-good, and some absolutely fabulous tiramisu. I haven't too many that look like the ones on the tiramisu Wikipedia page, which I'm sure would fit in the "absofreakydeliciosomazing" category.

So where does Trader Giotto's Tiramisu Torte fall on the spectrum? Well, you can probably figure from my intro where this is going. This particular adaptation certainly purports itself to be fancy. The package proudly proclaims "Handcrafted in Italy" and they slapped Giotto's name on it, after all. It's yet another frozen dessert to thaw out for a few hours in the fridge before consumption. When it came time to slice it up, well, the picture above tells the basic story. There's the thin layer of espresso sponge cake at the bottom, with a thick layer of mascarpone and a solid dusting of cocoa powder on top. The mini choco-bits that float around amidst the mascarpone aren't terribly noticeable, but that's okay as there's plenty enough flavor and richness abounding. There's not too much that I can say about it that differentiates it from most other tiramisu - everything tastes just about right. It's the usual rich, creamy, semi-decadent fare that my tastebuds have come to expect over the years. It does seem to have more cocoa powder than most, which I'll consider a plus. Other than that, there's not a whole lot to say. 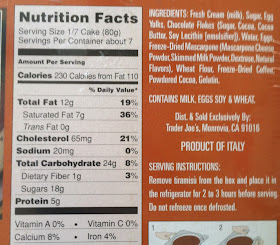 It's $6.99 for the whole shebang, which isn't too pricey for this type of deal.  If we were to purchase a slice or two at a restaurant (whch would probably cost like 5 buck each), and this were on our plate, I think both Sandy and I would be reasonably happy. Actually, Sandy liked hers quite a bit. "Ooo, you'll hate this. You shouldn't even bother eating your slice," she said in her usual tone that means "I want your piece, boy." Then, when I dared mention that it was merely "decent" as my first opinion she shook her head, rolled her eyes and I think even growled a little. "You don't like anything, do you?" Well, enough that I went for seconds, based mostly on the fact that the label says a serving is 1/7th of the torte (how you cut something like this into sevenths, I have no clue) and I had only about 1/8th. Sandy gives it a four, while I'll go a smidge lower.