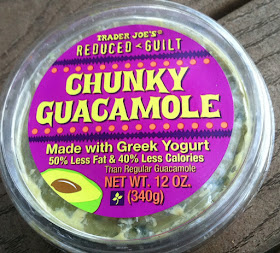 If you're familiar with our blog, you might be familiar with some of my wife Sandy's "food rules". If not, check out this corny post for a quick primer, cuz I'm running thru all them again. Anyways, guacamole is just something that she has decided she doesn't like. I have no idea whether or not it's something she's ever actually tried, but that's her. I don't think I could pay her to ever try it - too mushy, too mashy, too chunky, too avocado-ey. It's too bad, because, man, I love me some guac, but it spoils too quickly for me to justify buying a purchase a container just for myself, and truth be told, I'm positive she'd be a fan if only she were to try a little sample.

Anyways, lest you think this will be a one-sided review (I've sworn those off), fear not! For only the second time in our history that I can recall, we have a celebrity guest reviewer today. Ladies and gents, let's please welcome Tanya Novotny to the floor! By day she is a pharmacist extraordinaire, but while she's not busy saving the world one prescription at a time, she is an official TJ's nut who's not only tipped us off to some incredible breakfast treats, but also gave towards my Bike MS fundraising event a few weeks back, winning our reader contest to nominate a TJ's product to be reviewed with her two cents tossed in. Thanks again, Tanya! 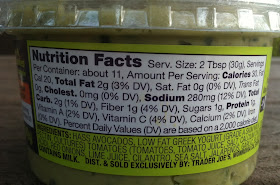 As far as Trader Joe's Reduced Guilt Chunky Guacamole goes, it's another winner. I respect what TJ's is trying to do here by taking a kinda-unhealthy dip and turning it into something that's at least somewhat better for you. Basically, think of blending an avocado with a bunch of Greek yogurt and add in some onion and pepper and spices and whatnot, and that's what we got here. Texturewise, it's almost exactly halfway between regular guacamole and Greek yogurt, perhaps erring on the side of creaminess, except for the occasional lil' chunky of avocado or onion, of course. As for taste, if eaten kinda piled on top of taco salad (as I recently ate it), the flavor kinda melds in with everything else, with only the Greek yogurt and lime finishing bite really sticking out. Stick a chip in and have some unencumbered by too many other flavors, and it tastes pretty close to how guacamole should, save for the Greek yogurty part. And that's not a complaint either. I've been on a Greek yogurt kick recently, and using it as a base for a tasty dip is a pretty ingenious idea.  I'd even say, if you partake of this particular guac, you can skimp on additional sour cream or yogurt altogether, which only adds to its healthiness quotient. A little less salt, though would be appreciated - I mean, with everything else, why add the sea salt? Eh well.

Tanya's a fan, as am I. "Almost as good as the real stuff," she said. She's had it a few more times than I have, and has noted she can taste a difference in the level of spiciness from batch to batch sometimes. If that's the case, Trader Joe's, make mine a little hotter next time, please! The ingredients say there's jalapenos in there, and I want to taste 'em a little. I'll add in her only negative statement here: "I know it’s “Chunky” but yesterday, I got a huge chunk of avocado and happily bit into it, only to find that it was an unripe chunk of avocado, and thus, was quite tough and bitter. YUK!" Ewww, glad I avoided that! Still, it's good enough for her to give it the equivalent of about a four. That, too, sounds just about right to me.