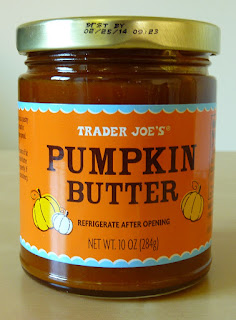 We both eyed the pumpkin butter from the middle of the aisle, peering over a number of other TJ's shoppers scurrying by. One other woman did a double take as she perused the jellies and syrups. It seemed the pumpkin butter aroused curiosity more than anything else. As Sonia and I debated whether to buy and review the item, one question rose up in our minds, "What would go well with pumpkin butter?"

For that reason, the jar has no fewer than 6 different suggestions for how to serve the product within. They recommend using it in soup, on ice cream, or as a poultry glaze, among others. Its uniqueness is both a blessing and a curse. On one hand, TJ's Pumpkin Butter is versatile enough that you can use it to make almost anything taste like pumpkin. On the other hand, even if you find a bunch of different foods that you want to make taste like pumpkin, you find yourself doing little more than experimenting with a culinary tool that you're barely familiar with and don't fully understand. It's kind of like the Twitter of the kitchen-world: obviously there's a lot of potential there...but ultimately, what's the point?

Furthermore, if you wanted something like pumpkin ice cream, for example, it would probably be best to just buy Pilgrim Joe's Pumpkin Ice Cream—a product whose pumpkin-properties have been balanced and blended by professional ice cream folks, rather than creating your own haphazard version using Pumpkin Butter and whatever you've got kicking around in your freezer. Although some people might prefer creating their own ice cream so they can tailor the mixture to suit their own tastes... 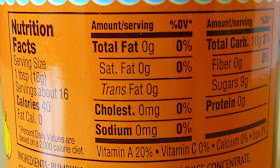 Texture-wise, the product is not unlike apple butter. There's pureed pumpkin, sugar, and honey. It's very sweet, but traditional pumpkin spices are definitely there. We tried it on toast. It's okay by itself, but we found that the most palatable way to eat it was with some cream cheese. Not wanting to waste time, energy...and potentially food, we steered clear of creating things like Pumpkin Butter and sour cream soup. And I'm pretty sure our Thanksgiving turkey this year will not be basted in this stuff.

I can't deny that there's something fascinating about it. It's good to try something new once in a while. But I just can't figure out what niche this product should fill in my diet. It's certainly no replacement for apple butter, jams, or jellies. It's just a bit of novelty. Three stars.

Sonia feels the same way, but because all things pumpkin remind her of autumn, her favorite season, she couldn't help but enjoy it. She almost gave it four stars, but decided on three and a half.