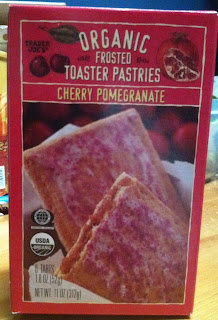 Mornings sure have been a lot different over the past week or so here at the Pittsburgh WGaTJ homestead. Sandy's back to work with Baby M tagging along, which is a nice perk of working at a daycare, ahem, early childhood education center.* Since we try to carpool as much as possible, that makes for one busy busy morning of waking up, getting myself ready, getting a baby who doesn't want to be awake yet ready, while gently nagging/slightly hollering at the wife who REALLY doesn't want to be awake yet to get moving as well. We're both far from morning people, so add in the extra tiredness of waking up at 4 a.m. to change the diaper (my job) and feed the baby (Sandy's) and falling asleep for whatever winks we can get after that to get up and running, well, it barely leaves time to do much else besides the bare minimum. Not that I'm complaining. Wouldn't change daddyhood for the world, and I certainly wouldn't change diapers for anyone else, either.

Naturally, a good, quick munchie on the go is in order to help get the engines fired. While I can wait for my French press at work for coffee (why did you discontinue my favorite, TJ's?), I need something to head off the rumbly in my tumbly right away. For a long while, my fuel of choice has been a quick pb sandwich but my favorite one is recalled right now, leaving me in search of other options. I guess being my favorite comes with a heavy, heavy price. 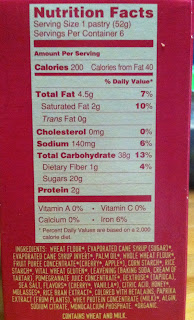 Well, nothing bad ought to ever, ever happen to Trader Joe's Organic Frosted Toaster Pastries. At least,  sure as all heck hope not. The obvious comparison is, well, pretty obvious. Listen, this ain't no Pop Tart. TJ's got themselves a product markedly better. Let me count the ways. First, the pastry shell is made with whole wheat. Sorry for the gluten-free crowd, but that's a win over whatever overly refined stuff the competition uses. It tastes wheatier and better and healthier, plus I think that's why these seem a little more filling/satisfying than the regular fare. Of course, I have no idea if they're actually really any healthier, but I'm just assuming so, because that's what the word "organic" means to me. Second, the filling itself - we've tried just the cherry pomegranate variety, and the filling tastes like real, actual fruit instead of glucosey/corn syrupy colored sugary gunk. Okay, hmm, on that point, they probably are healthier. Works for me. Add on enough purplish frosting and sparkly sugar on top that it'd make Prince blush for a little added taste, and these will more than hold me over for the 10 a.m test.

We both like them quite a bit and I know we'll be buying them again our next go-around. I had to talk Sandy out of eating a pack on a Sunday morning when we had a lot more time AND leftover carrot cake for a sweet breakfast treat. She said something silly about really really really really liking them, but I fail to remember what that was. We also failed to try them out after toasting them, because, well, who has time for that when there's a screaming hungry baby to drive across town during rush hour before feeding her? Not us. No matter. Sandy gives them a solid four, while I'll up that a notch. They're not our favorite breakfast pastry from TJ's, but on a busy morning, they'll more than suffice.