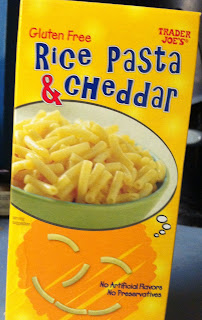 I've gone on a whole diatribe about macaroni and cheese before, so I'm not going waste yours and my time rehashing it all. Let's just get down to business here.

Truth be told, Trader Joe's Gluten Free Rice Pasta & Cheddar was not a product I was particularly eager to buy, much less consume. I think it's the "rice" part. Now, I have nothing against rice, per se, as Sandy and I keep a sealed bucket in the kitchen full of it, and we eat rice probably at least twice a week. It's just that I've had rice step outside the realm from which it belongs and total ruin something. A prime example is some TJ's rice flour tortillas which really ought to be discontinued - I bought them once, nearly retched upon first bite, threw them out (this was before I knew about their awesome return policy), and have refused to buy since. Just keep away from them. Far, far away. So there's that, and there's the fact that TJ's has already made a perfectly good corn pasta for the gluten-free crowd. If I were in charge of the whole shebang, that would be the route we'd take here.

But I'm not in charge (not yet, at least), so here we are with ricey mac 'n cheese. Eh. I'll be honest, I'm not a huge fan. There's just something that tastes a little off. Maybe it's all the gluten that's not in it. Sandy made up the pot, and while admittedly she may have undercooked it by the tiniest bit, the noodles were a little too dense and chewy. For whatever reason, the thought that came to mind for me was thick newspaper. That's kinda also how the noodles seemed to taste. Also, in my experience, I've always mixed the powdered cheese, milk and butter right on top of the noodles in the pot. Not this box. It actually instructs you to mix all that together separately, then pour over. Sandy, as always being the directionally obedient chef, obliged without too much questioning. I could be completely making this up, but as a result I don't think the sauce clung to the noodles nearly as well, and yeah, seemed to taste a little off. Is there gluten in regular mac 'n cheese cheese sauce? Don't know. But that could be it. Fortunately, it was all something that a little hot sauce could fix.

For the record, Sandy thinks I'm full of it. "You made up your mind before even trying it that you weren't going to like it and now you're going to write a review nitpicking it left and right just because it's different," she said. Talk about being put in your place. She's probably at least partially right. Sandy deemed it worthy of a four, and has reiterated several times how much she likes it, as if the brand needed her personal, continual affirmation to make it thru each day. Me? I'm trying to be fair but it's just not that great. For the gluten-free folks, this simply isn't how boxed mac 'n cheese tastes. You don't deserve another not-so-great imitation of an American classic, especially when better glutenless noodle technology not only exists but lurks only a mere shelf or two over. I'll play nice with a 2.5.