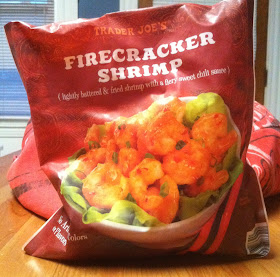 In a recent post, I described the new morning routine that Sandy, Baby M and I are now have now that we're both back to work while M's off at baby school (fairly conveniently at Sandy's jarb). Those can be a little rough. Know what else is tough? Evenings. For those of you with kids, you probably know that already, and I don't want to sound whiny, but we're just trying to get settled into the "new normal." Finish up a long day of work, get home, feed the baby, take care of the dog, feed the baby again, be tired, be hungry, deal with a crying baby who apparently cannot stand the mere thought of both of us eating at the same time, do chores...the list doesn't end. Add in the occasional run to the chiropractic office not only for Sandy's back, but also for my elbows and arms to stop hurting after sneezing (true story), and it can only make things more hectic.

No wonder convenient meals-in-a-bag are so popular. There's barely time to do much else some nights, especially when your belly just needs some grub before moving on to the next thing. While we definitely got a preference for homemade dinners and have maintained a good habit of those whenever possible, there's some nights we just kinda cave in and grab something quick 'n easy.

Recently we nabbed ourselves the Trader Joe's Firecracker Shrimp. Most TJ shrimp products have done well for us - routinely, it's high-quality, fresh-tasting crustaceany critters that's not salty or gritty or mushy like too many other store brands I've had. Mostly our quibbles have only been with whatever gets slopped on them, or what they come packaged with. History holds true here. Excellent, excellent shrimp itself - fresh, roughly quarter-sized, firm, with a little light coating on them that crisped up in the oven well enough. Absolutely no complaints. It's just the sauce again. Exactly as you do with other products like the Mandarin Orange Chicken, after you bake the bites you swirl them in a bowl of the sauce. For something that's marketed under "Firecracker," I'd expect some heat, except TJ's repeats its classic error and confuses vinegar with spice, which is not that nice. Combine that with the lemon and sugar and whatnot tossed in, and the sauce tastes almost downright citrusy with nary a hint of the sriracha that it purportedly contains. I'm thinking the sauce would be greatly enhanced by adding some of my own chili powder or some crushed red pepper, but as it comes, it's lacking in our book.

That's not to write the dish off completely. But it's kinda disappointing, knowing just how much better it could actually be with a few small tweaks. Aside from the sauce, Sandy said the shrimp could do with either more breading, or none whatsoever. It probably didn't help that half the coating stuck on our foil-covered baking sheet. Also, say, if I were to buy this at a restaurant, I'd be happy with the quantity of shrimp for our $6.99, but for a make-at-home dinner, even a low effort one like this, either the price could stand to go down, or there could be an extra handful of shrimp included. No matter. It did well enough for a busy Monday night, and it reconfirmed that homemade dinners almost always win in our book. However you want to split our score, you're probably right.