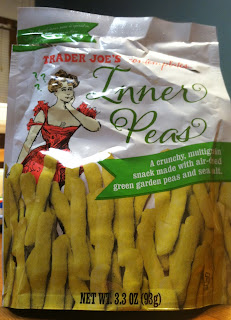 I'll admit it, I wasn't eager to try out Trader Joe's Contemplates...Inner Peas. It has nothing to do with the terrible reach for a pun for the name, either. It's just that, normally speaking, if I were to be in the mood for something crispy and vegetably-inspired, why not eat, I don't know, any actual vegetable?  I mean, that's an ideal to strive for, to hunger for fresh produce instead of some pseudo-wanna be-potato chip-type thing, and one I'll freely admit to falling short of quite often. That doesn't change my position, though. Not only that, but with just an exception or two, I have not been a fan of most of TJ's crunchy vegetable snackies - I mean, one of them tastes like a stale McDonald's fry, for goodness' sake. Semirelatedly, I flat out refuse to try their seaweed snacks (wasabified or not) because just the name brings back some bad memories of Japanese rice cracker/seaweed snack my dad liked when I was growing up. Nearly made me upchuck every time.

Sandy, though? I'm not sure how artfully my photo hides the large gaping gash at the top of the package where she eagerly and ravenously ripped it open in anticipation of all the little munchy green pea sticks inside. I mean, girl's gotta do what a girl's gotta do, I guess, but let me take a proper picture first. I guess by that, she's just demonstrating how far up her alley a snack like this is. Maybe she just couldn't have her inner peace until she had her Inner Peas. Great, now I'm making bad puns, too. 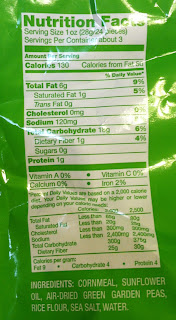 As far as the snackety snack goes, I am neither appalled by them, nor am I overly enamored, either. To me, an Inner Pea just tastes like a crunchy, semi-Styrofoamy stick that tastes a little salty, slightly oily, and however slightly reminiscent of a pea. And believe me, I can definitely tell when something's made from rice flour, as it usually tastes a little off to me. There's no mistake here - they're ricey, and for all that, gluten still sneaks in somewhere. Aside from that, if you told me these were mummified green beans, I'd probably believe it. Maybe that's your kinda thing. Maybe you use them as a dipstick for some good hummus, and that's probably a half-decent idea I wish I would have considered before these al disappeared. By themselves, though, they're kinda nondescript and while "bland" is not the right word, "flavorful" certainly isn't, either. They're just kinda...there. Maybe, for my palate they're just too contemplative and peasfull...dang, another one...sorry!

Sandy might like them a little more, but she's not exactly bowled over, either. "They're not great, but they're not bad either," she said. Based on her aforementioned eagerness, that almost sounded like a slight indictment to me, so I was a little surprised when she gave them a 3.5 rating. Sandy did, however, add that she'd probably like them more if they were in a salad or something of the sort. Me? I'm willing to allow for the fact that the pea sticks just aren't my kinda thing, so I'd be willing to be slightly more generous if not for my wife's rather muted reaction. I don't know, I'll say a 2.5 from me. I'm at peas with that.