From what I can gather, unlike most of you, I don't get all that much into the pumpkin-everything craze every fall. Sure, I'll enjoy a slice of pumpkin pie or the occasional pumpkin beer, but yeah, pumpkin this, pumpkin that, pumpkin this-other-thing and pumpkin-that-other thing? Meh. I guess I'm the anti-Linus, not in search of the Great Pumpkin. In the autumn I get much more excited about crockpot goodies like potato soup and chili and pretty much anything on my second favorite blog ever.

For the fall time, if I had to say I'm excited about any seasonal fruit or vegetable, I'd choose apples. Yeah, I know, they're not "seasonal" in the traditional sense like pumpkins, but you know what I mean. Going apple picking. Apple sauce. Apple cider (or as my four year old nephew calls it, "apple-spider juice"). Apple crisp. Apple pie. Now, that I can get behind. 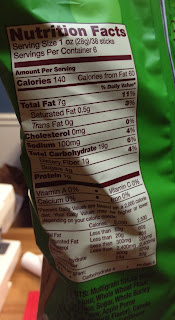 As for Trader Joe's Cinnamon Apple Snack Sticks, I can get behind them too. Don't get me wrong - they're not nearly as good as any of those aforementioned tasty treats. But, like anything else, they have a time and a place. And get this: they're made from real apples, too. Sure, they're all pureed up and tossed into a multigrain mix, but they're in there, with the sweet, slightly tart taste poking through here and there. Tastewise, using Apple Jacks as a base comparison, these snack sticks are probably at least ten times more actually apple-y. Add in the cinnamon that's liberally blasted on each stick, and the end result is a pretty munchable treat that's a much welcome break from the norm.

Count me as a fan. These will be making my list as a repeat buy, even if Sandy's not as big a fan as I am. "They could be a lot more apple-y," she says. I'm not sure if that's completely accurate for a snack food that's in a similar vein as Funyuns, except, well, better. She does note they'd go well with a bowl of vanilla ice cream or a mug of hot cider. Now you're talking, sweetie. Her score's a measly 2.5. For me, I like the well-balanced taste between the apples and the grains and the cinnamon, yet they're not addictive enough I feel like I have to eat them handful after handful. They're not a bad treat at all.