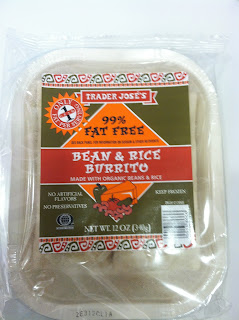 Ah, the first few days after New Year's. I really don't know how common it is for folks to make New year's resolutions any more. All I know is, after last New Year's, it was darn near impossible to get into the gym where Sandy and I have been members until sometime in mid-March (while it was no-mans land all around November and December). I guess that goes with the typical "lose weight/get in shape" mindset that strikes each early January. My New Year's resolution this year was to stop putting up with my crummy wisdom teeth and so I got them yanked a day or two ago.* Now that's a fun way to start your year, barely able to eat or talk, and with an ample supply of Vicodin on hand. For some undetermined and probably at least half-inaccurate reason this makes me feel like I'm Gary Busey.

Anyways, back to the "be healthier" idea...yeah, I could go for that, too. I mean, you should see what all I ate over the holidays, mostly homemade (hence the not so many reviews recently). So I'm looking for healthier food options, like low fat, possibly organic stuff that tastes good and at least for work lunches, can be quick to grab in the morning and simple to make at meal time.

I think as much as microwavable burritos can fit into a semi-healthy diet plan, the Trader Jose's 99% Fat Free Bean & Rice Burritos work. They're $2.69 locally a pair and zap within a few minutes in the microwave. Of course you can also bake them for like 25 minutes but I have neither the time nor the oven at work for that. Once made, they're neither utterly terrific nor barf inducing. Inside the flour tortilla it's a warm bean mush with a little rice, the typical Mexican spices, and allegedly some cheese. I wish they had more rice, actually. There's no more than a small spoonful of it per burrito, and there's more than enough room for more rice while keeping the same amount of beany lava. As for the cheese, well, naturally it's the light variety, so it's not as present 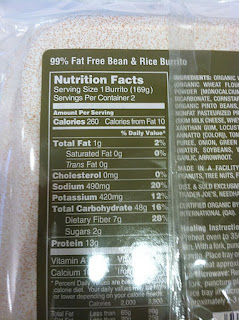 of a taste as I'd like...okay, I'll admit it, I really didn't detect it other than looking over the ingredient list. All that being said, they're semi-tasty enough, and definitely fairly filling. I'd say these TJ burritos are a couple steps above the drive-thru variety, but probably won't rock your world either. And of course, with all the sodium they don't make an ideal health food, but they're better for you than most drive thru/microwave options available, so I'll cut them some slack.

There's nothing overly wrong with these. It's just that nothing really sets them apart either. I'm not above buying them again, but for about the same price there's much better available at Trader Joe's. Like most of my lunch dish reviews, this is me flying solo on this, as Sandy works at a preschool with an edible lunch provided to her most days. Maybe this is the hunger pangs of not having solid food in a couple days talking, but I'll give these a little higher grade than I might otherwise with some matching 3s. You have no idea how grateful I'd be for some solid chow right now, even if it's a couple burritos that put the "meh" in Mexican.