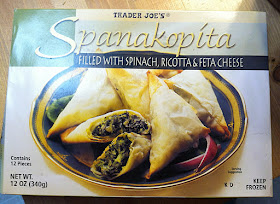 You know, I was planning to start this off by going off on some tangent about Greek food festivals here in and around the 'burgh (there's one pretty much every week in the spring and summer, which is awesome) but then I looked up what the word "spanakopita" means in Greek. I'm so disappointed. There's a part of me that gets excited when I find out that a food name like "burrito" can be translated as "little donkey" or, my favorite, that "gordita" can be taken as "fat little girl." Now I know that Greece has a rich tradition of mythology and also I've watched enough Popeye cartoons to know what spinach can do for a guy, so, really, I was hopeful. I figured it meant something like "Zeus vitamins" or "favored munchie of Apollo." Heck, I'd even settle for "Minotaur vegetarian option." But no, it means nothing like that . Spanáki (spinach) + pítta (pie) = spanakopita (spinach pie). While being straightforward, it's also pretty lame. Eh well. Regardless of its pitiful nomenclature, spanakopita is one pretty tasty treat that Sandy and I routinely enjoy at the aforementioned Greek food fests so when we saw that Trader Joe's offered a box that just might get us through the lean winter months, we figured it was worth a shot.

Well, it's nothing like your yiayia's homemade batch, but for what it is, Trader Joe's Spanakopita is decent enough. $3.99 gets you a box of a dozen good-sized triangles that bake up in the oven. Whoever invented the idea of phyllo is a genius. Though so inefficient as dough needing layers upon layers, the phyllo on those bake and brown up real nice, keeping crispy in spots it needs to be crispy, and a little mushily saturated when it comes in contact with the spinach filling. The spinich filling works alright, too. It's strangely reminiscent of my mom's homemade spinach soufflé (which, believe it or not, was a favorite dish of mine growing up) as there's a lot of chopped up spinach with some feta and ricotta (more ricotta than feta, which is a minus) with a pinch of onion and whatever Greek spices. It seems like there's an appropriate amount per wedge, too, so all in all, they're pretty decent for the bake-from-a-box variety. 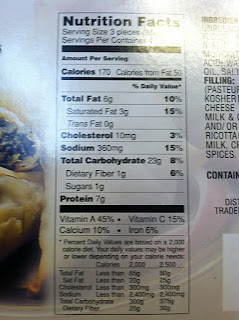 That's not to say they'll be joining our pantheon, though. First, there's the relative abundance of ricotta versus the pittance of feta. I know you want to keep it cheap, Trader Joe, but c'mon now. There's only enough feta in there for it to be tasted but not really experienced, at least in our box. Secondly, the box. Look at the picture. It's so lame. Put some gods or cyclops or at least Socrates on there, for goodness sake. Also it refers to the dough as "fillo." I've seen "phyllo" (my preferred spelling) and "filo" but never "fillo." It's not the first time that TJ's makes a goofy error like that on a box, but combine that with the generic design and lack of feta, I can't help but think this is some cheapie knockoff frozen brand in TJ's clothing. Kind of like the Trojan Horse, I guess. One last gripe: the spinach filling kinda spewed partially out halfway thru the baking time, causing this burnt mess I had to scrunge off our baking sheet, which I hate doing. As a word of advice, put some tin foil under these suckers. You'll thank me.

It's time for the Golden Spoons...hopefully we won't *fleece* them...sorry. Sandy seems to like them well enough, but I was a little perplexed when she went with a four for them. "They're not as good as the real thing, but they're pretty good anyways," she said. Hmm. Apparently, they're also not as good as reheated leftover pizza crust to her either, as she opted for those over her third spinachy bite during our pizza and spanakopita lunch the other day. Not like I'm complaining for picking up her slack, but let's just say these don't exactly get my Zorbas dancing either. I'll counter with a 3.5.