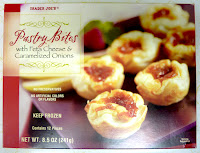 Sometimes Sonia and I buy things from TJ's and I never get around to reviewing them for some reason. I eat the product, I analyze the product, I think about maybe writing something about the product, and for whatever reason, I just don't get around to the review. The following is a review of a product that we've bought no fewer than three times and never reviewed. I'm not sure why. I like them alright. I think we've always just had them as hors d'oeuvres for little parties and get-togethers, and I've always gotten distracted by our company or the other food we had or maybe just the general craziness of life. Whatever the reason, a review of these little guys has been a long time coming, and I'm anxious to share my thoughts about them.

For starters, the fact that we've bought them at least three times should tell you something. Our ultimate goal is to review as many TJ's brand products as possible (that goal of reviewing EVERY Trader Joe's brand product is looking more and more unrealistic every day) so repeat-buys are rare; reserved only for the really good stuff. Also, these pastry bites have been available at TJ's since before the inception of this blog until now. TJ's is known for discontinuing products at the drop of a hat, so for something to last for over a year and a half is no small feat. Not only that, but Sonia and I started out by reviewing Trader Joe's products in the Los Angeles area, and now we're reviewing them in the Philadelphia area. (The Shelly's are in Pittsburgh). And those of you who've ventured into Trader Joe's stores in multiple cities are probably aware that their delectable fares vary from region to region. So the very fact that this item has been readily available on both the west coast and the east coast should tell you that it's a popular product.

As mentioned in previous posts, I'm comfotable eating goat cheese with sandwiches, soups, salads, or any savory or salty snack, however, it should not be partnered with sweets or dessert foods in my humble opinion. As I have just learned, thanks to Wikipedia, feta cheese is made of mostly sheep's milk. Weird. All these years I thought it was a type of goat cheese. Apparently, it may be made with a combination of sheep's milk and goat's milk, but sheep's milk must be the primary ingredient. At any rate, I would put feta into that same grouping of cheeses that work only with non-dessert items.

Thankfully, these are not dessert pastries. And caramelized onions, though somewhat sweet, are still in a family of foods that belong with non-dessert items. Can you imagine eating caramelized onions with ice cream or cake. Yuck!

I think these pastry bites are the first and only food I've tried with both feta and caramelized onions. And I gotta tell ya, I'm feelin it. Totally. This is one of those combos like peanut butter and jelly in which its ingenious inventor should get the Nobel Prize for Food Discoveries or some such prestigious award. The onions are slightly sweet and very tangy. The feta gives it this wonderful, zesty savoriness. The pastry part of this hors d'oeuvre is very similar to other Trader Joe's brand oven-ready hors d'oeuvres like these Scallop Bites. It ain't the Ritz, as they say, but it's certainly not bad, either. It's a crispy, flakey, crown-shaped little bowl of yumminess. And in it sits more yumminess.

Sonia gives it a 3.5. I think her score might have been higher, but for some reason she is in a bad mood currently. She won't tell me why yet. But when I ask, "What's wrong?" her reply is an immediate "NOTHING," which, I've learned is not a good sign. Undoubtedly, I've done something wrong. I suppose I shall find out in the sweet bye and bye what it was.

I was torn between giving them a 4 and a 4.5, as these are some of the best snack-foods I've had from Trader Joe's. I finally decided to go with the 4.5 to counterbalance Sonia's inaccurately low 3.5. At any rate, we wind up with an 8. So be it.