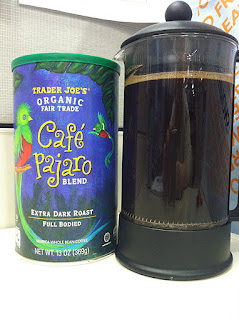 I'm going to admit that I'm really not all that knowledgeable when it comes to coffee. I'm just not. I sorta know what a café au lait is because that has been one of Sandy's usual pickups out at the coffee shops. But a caffè americano? A latte? Espresso versus cappuccino? Can't help you there. Heck, I get confused about what Starbucks names their sizes. I'd be the world's worst barista, easily. For a good space of time, I was thrilled with whatever gas station brew as long as there was a good selection of the little colored International Creamers available.* So, yeah, I know I'm not exactly a threat to take over the title of Mr. Coffee, but I know what like. I like coffee that's dark, strong, and vibrant, that'll smack me awake as I settle in with a fresh French press-full for a long day's work at my corporately bland, super-bleachy lighted, muted cubicle (as you can see from the picture - hey, look, my reflection!). In other words, completely the opposite from the free work stuff that tastes like brown water that somehow spoiled. With the right stuff in my cup, there's a fighting chance that I won't commit a felony or curse out some ridiculous insurance company have to deal with (believe me, I've come close).

As a coffee novice, I generally like Trader Joe's selection. Two big winners for me are the New Orleans Style with Chicory and the Italian Roast, but even the cheapie Cup of Joe stuff does alright in a pinch. This past time around, it was time for something new, so let's get on with the Trader Joe's Café Pajaro.

In case you don't know Spanish or couldn't pick it up from the packaging context of the big ol' Toucan Joe, pajaro simply means "bird." So we're talking about bird coffee. I guess that's supposed to make consumers feel like it's a tropical treat. Eh, maybe. The coffee bean mix comes from farms in Nicaragua, Peru and southern Mexico, so it's at least a little exotic-y. The beans are definitely dark roasted but not scorched (like way too much other stuff out there). When brewed, the output is definitely dark, dark coffee that smells rather inviting. For me, a little half and half is all I need to get it right. Too much added sugar will cover up way too much of the natural flavor that's subtly sweet with some chocolate tones. The good thing is, unlike some coffee/cocoa crap I got at TJ's around the holidays, the chocolate taste is there but it doesn't muddy up the overall flavor. It's not quite as bold as I'd like (especially when compared to the TJ's chicory coffee) but it's certainly not weak or watery tasting at all. It won't be the best-tasting coffee you'll ever have , but the Café Pajaro makes for a good cup better than any at-work option, and for $7.49 a canister, a decent value. Definite bonus points for being organic and fair trade.

For the most part, Sandy's been off coffee for the past couple months. The few times she's snuck a sip here and there, she's grimaced and said "blecch" and not much else. Oh, good ol' pregnancy-induced taste aversions that ruin things you once held dear (like one time when we went out for Mexican food). If the baby doesn't like coffee, what can you do? Anyways that means I'm handling the judging of this by myself, like an adult. Hrmmm. It's decent enough but I like the aforementioned ones better, so let's be fair about it and say....