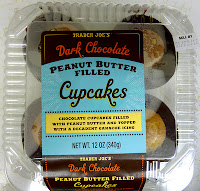 After our last review, Sonia and I were feeling a bit gluten-deficient, so we ran out and picked up some cupcakes. Not gluten-free cupcakes. Regular old glutenful cupcakes.

Now, I was super hungry when I tried these for the first time. It was the day after we got them home from TJ's. The cupcakes were moist, rich, and delectastic. (Does that fictitious adjective work for you? I have mixed feelings about it. It's supposed to be a contraction of "delectable" and "fantastic," but it kind of loses some of its potency when I have to explain that. But probably most of you would have gotten it anyway...I think. But anyway, I digress). Yes, delectastic. And I'm not really the hugest fan of dark chocolate. I know dark chocolate is tres chic right now. Everybody loves chocolate, and dark chocolate is supposed to be better for you than milk chocolate because there's less sugar and more cocoa bean and more antioxidants and more magical unicorn juice and all that nonsense. But I'm actually a fan of white chocolate because there's more sugar and less good for you stuff—and perhaps one of the best desserts I've ever had was a white chocolate peanut butter cheesecake from the Cheesecake Factory, which is one of the most unhealthy restaurants in existence. If you actually look at the nutrition information for what you're eating, you'll probably never go there again. But anyway, I digress again—for the second time in one paragraph. Maybe it's time for a new paragraph.

Ahem. My point was that I like sweeter chocolates better. But in this case, the dark chocolate was both rich and sweet. Sweet enough for me. It blended with the peanut butter beautifully. One of the best cupcakes in recent memory. And I've had some pretty tasty cupcakes in my day. Crumbs and Frosted Cupcakery come to mind. There are those who will tell you that Sprinkles is of the same caliber as those guys, but I'm not one of them. Nor is Sonia. I'm also hoping to check out cupcakes from the legendary Magnolia Bakery in Manhattan on our next trip to NYC. And for you gluten-free people who've made it this far into what has become a highly gluten-laden article, please please please check out Sweet Freedom Bakery in Center City Philadelphia next time you're there. Amazing. In fact, if you're kosher Jewish, vegan, or allergic to wheat, soy, corn, peanuts, eggs, and/or sugar, you can still check out their products. Seriously. I'm not sure what is in their stuff, but it's none of that stuff.

Definitely not the case with these TJ's cupcakes. In fact, I think I just named the entire ingredients list of these cupcakes in that big sentence near the end of the previous paragraph. But on with the review. I ate two cupcakes the first time I tried them. They were great. The following day, Sonia insisted that I have a third while she ate the final one. I didn't put up too much of a fight, even though my tummy was protesting because of the first two cupcakes. (I am gluten-sensitive, but not really gluten-intolerant). This third cupcake was definitely not as good as the first two. It might be partly because I wasn't as hungry, but I think a big part of it was that the cupcakes were actually beginning to get stale. It had only been about 24 hours, but there was a distinct difference. Those first two cupcakes would have gotten a 5 from me. That third cupcake would only get a 4. So I'll split the difference and give these guys a highly-respectable 4.5 stars out of 5.

Sonia gives them 4 stars. She says they're not too sweet, just sweet enough. She says its a perfect peanut butter to chocolate ratio. She's a fan. And she's an even bigger cupcake connoisseur than I am.