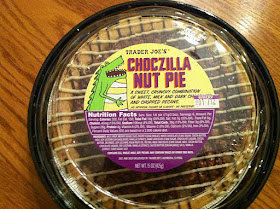 For a couple alleged grown-ups, my sister and I have a little too much of a weird things going with tyrannosaurus rex*. Every time we see each other, she and I engage in what we call a "t-rex hug" by stomping up to each other while snorting while holding up our arms short - umm, we even did that right in the middle of my wedding reception...yeah, I'm glad Sandy laughed that off. My sis and I routinely trade pics like this one or this one, and I was beyond ecstatic when she gave me this shirt for a Christmas present. Don't ask me why, but I love stuff like that (I think of it as an alternate icanhascheezburger-type thing) and by extension love the old Godzilla movies (even though they're now the reason why I hate ketchup, but that's a tale for another day). Comparison graphics like this one make me actually even more excited for the arrival of Lil' Russandro/a in late June.

So, yeah, needless to say, want me to buy something? Put a t-rex (or something close) on it. Add in the fact it's mid-evening on a Sunday, you're flying solo and have to find a dessert for an evening family meal, the shelves are depleted and your pregnant wife is demanding something chocolatey but not cheesecake-y, and there's something on the fresh baked goods shelf with a "Choczilla" on it, and even for a kinda steep $6.99, you got a deal. 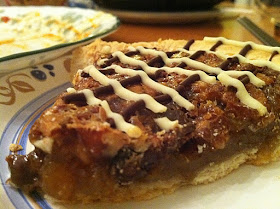 omething called a Trader Joe's Choczilla Nut Pie, it severely lacks enough of both chocolate and nut to stave off some disappointment. Basically, it's just a regular ol' pecan pie with dark and white chocolate stripes across the top and a small smattering of milk chocolate chips down below. Don't get wrong, it's good, but it's not even close to my Aunt Brenda's homemade pecan pie, the best in the world, against which whether fairly or not I judge all pecan pies. Hers is heavy and literally full of pecans. This? There's a thin layer at the top but mostly it's the mushy underbelly. That kinda helps the pie taste a little bit richer and perhaps a little more chocolately than it actually is. The crust is typical store brand fare, which I'm impartial on. And ohbytheway, don't bother squinting to make out the nutritional info. It's atrocious.

A better name for this would have been something like a "pecan pie with some chocolate" and if a reptilian mascot was really needed, use a gecko (they can shill more than just car insurance) or a snake or something. I'm really not sure what that'd have to do with pecans (maybe a mild chipmunk would be better), but I digress. My whole thing is, the name "Choczilla Nut Pie" conjures up an image of a thoroughly nutty, chocolately pie that this is clearly not, and honestly, although it's tasty, I'm pretty disappointed. It's definitely better than some types of chocolate pies out there, but overall the pie just lacks too much.

Sandy's in full agreement with me. "It could more of either and it'd be so much better. It's kinda weak as is, but still tasty," she said. I concur. If this were my creation, it'd be a full out chocolate pie with every kind of imaginable nut jammed in, and not just a slightly dressed up average-at-best pecan pie. I doubt this will be a repeat purchase for us, and based on that fact, I'll go a bt lower than the three Sandy granted it and go with a 2.5. Kinda like the arms of a t-rex, this definitely falls quite a bit short.