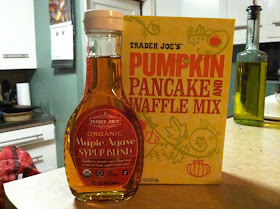 Hooray it's fall. That means: ever encroaching dusks, cooler temps, leaves changing, playoff baseball, football on TV at least four nights a week (much to Sandy's chagrin), and Sandy hogging all the blankets every night (much to mine). Fortunately, for all involved, it also marks the return of all things pumpkin. Pumpkin pie. Pumpkin coffee. Pumpkin beer. Pumpkin bread. Pumpkin seeds. Peanut butter pumpkins. Pumpkin everything. I know lots of people who, like Linus, await the return of the Great Pumpkin every year, except instead of sitting in a field with a blockhead, they're just waiting for shelves everywhere to be stocked with pumpkin-related goodies. Me? Meh. I like them and all (especially my mom's pumpkin pie), but tend not to go berserk and light up Facebook with pics of the Dunkin Donuts Pumpkin Latte sign the first morning it appears like some of my dear friends (you know who you are). I can appreciate a good pumpkin-related treat here and there, as can Sandy, but I'm more eager for the holiday goodies up around the bend. Til then, though, pumpkin overkill, here we go.

Well, we already know thanks to Nathan that Trader Joe's makes a decent pancake mix. What's it like if we get in the seasonal mood and toss in some pumpkin? The Pumpkin Pancake and Waffle Mix kinda scraps the "all purpose" facade (what do you mean, it can't fix the teeny leak in my roof?) and goes for the pumpkin jugular. Or so you'd think, if your Trader Joe's is anything like ours, where boxes are prominently piled near the entrance and hailed as the newest and greatest thing since, well, last week. Sandy and I decided to give it the old college try a few nights back to see if it was worth the hype.

First, the mix definitely smells pumpkinny, like pumpkin potpourri, almost. I'm half-tempted to sprinkle some in my car for air freshener. It smells good. Taste...well, almost. You get the sense of it, and there's a little tinge of nutmeg and cinnamon and allspice and ginger, and it's just enough to remind you that you're eating something slapped with the pumpkin label. But it could be a lot more, well, pumpkin-like. We've actually had it twice now. The first time, Sandy made some crepes for us and our friend Lisa, and while good, we all felt like there was something a little amiss. Maybe it was because they were thin crepes, we said. Well, to test our hypothesis, and to see just how easy they are to make, I, Russ, took it upon myself to make a batch of regular-style ones for tonight. I've never made pancakes before, and like my reviewing counterpart, while I can make lots of good food, there's some stuff I need some grace on kitchenwise. Anyways, my initial fears aside, it's enough to mix up with some milk, melted butter and an egg, and managed to not set off the smoke alarm and make some pretty darn respectable flapjacks for dinner if I may say so myself. This time around, our dinner was a little more pumpkinny, but it still sided more on the under-toned part of the scale.

And of course, you can't have pancakes without some syrup to drench them in. Trader Joe's does have some pretty decent maple syrup, but that Joe, he just has to experiment a little, doesn't he? Enter his Organic Maple Agave Syrup Blend. I'm by no means an all-out syrup snob, but generally speaking, I strongly dislike the fake Aunt Jemima junk and much prefer the real stuff (kinda partial to Vermont origin, but Canadian-born is acceptable, too). Okay, maybe I'm a semi-snob. Well, this semi-snob doesn't know all that much about agave syrup except Trader Joe's has another organic blue agave syrup that Sandy gets every once in a while to mix in coffee instead of sugar. That and usually it's Mexican. Our neighbors to the north and south apparently then tagteamed each other in making this syrup, and it's okay. It's not as thick as 100% pure maple syrup, of course, and is definitely more sugary and sweet than amber-y and maple-y. I suppose we should have figured that. For three bucks, it's okay I guess, but for another buck or two, you can do better at TJ's. Much better.

Still, make some pumpkin pancakes and slather on some maple agave syrup, and it makes a good meal. Kinda like the recently retired REM's discography (and exactly the opposite of this year's Philadelphia Eagles squad*), when taken altogether, it's greater than the sum of its parts. Maybe I'm trying too hard to get into the autumn mood, or maybe I just really really really liked the cinnamon honey butter that Sandy whipped up, but I liked the combination both times around more than I liked either the pancakes and syrup separately.

Sandy, who usually is more into pumpkin and funky goodies than me, had more or less the same reaction both times around. The pancakes could taste more like pumpkin, and the syrup could taste more like maple instead of maple/sugar goopy water. Without too much hesitation, she branded each with a three. I'm inclined to agree with her on the maple agave syrup (I'm betting it'll sit in the fridge for a long time) but, when thinking of my two pancake dinners in the past three nights and reasonably enjoying each one, I think the pancake mix gets a four. For me, I guess if I had to decide between "too much" and "not enough" pumpkin flavor, I'd go with "not enough." It certainly beats getting another rock in your trick-or-treat bag, Charlie Brown.