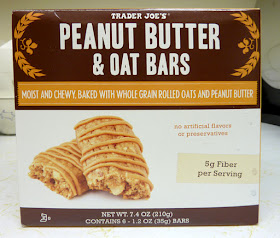 These remind me a little of Tiger's Milk bars. Remember those? They're little energy bar kind of snack things. I think they still sell 'em in 7-11's and such. I always liked Tiger's Milk bars. Funny name, though. It sounds like some bad line from Charlie Sheen during his heavily publicized psychotic period. "What are the three things in my tummy? I was hoping you wouldn't ask that. Um...let's see: bile, intestinal fortitude, and tiger's milk." Right, Charlie.
But anyway, I like them. They're filling and flavorful and reasonably-priced. At first, I thought I saw actual peanuts floating throughout the bars, however, after munching away for a minute or so, I realized I hadn't really crunched anything at all. It was all chewiness all the way. Upon closer inspection, what I first assumed to be peanuts proved to be peanut butter chips: perhaps not as healthy, but at least as tasty. I certainly wouldn't have minded a few peanut-halves. In fact, that's my biggest complaint about this mostly successful product. Why make something peanut-flavored and not add peanuts? It's not like peanuts cost $8 a jar like macadamias. And although the chewiness was nice, I'm always down for a little crunch-factor.

I can never predict what Sonia will think of products like these. Sometimes she thinks things are too dry, or that they make her too thirsty. Fortunately, she thought to bring a spot of milk with her when she tried these for the first time. No, not tiger's milk. Cow's milk, I believe. But at any rate, I recommend them. They're peanut-buttery, filling, and they have a nice flavor. Four out of five stars from me. Ditto from Sonia. Bottom line: 8 out of 10 stars.