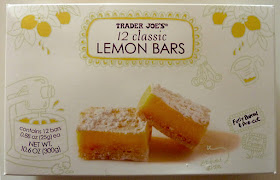 In general, desserts do very well on our blog. They often have an above-average number of pageviews from our readers, but even more often than that, they score above average in our 0-10 points rating system. In fact, the last two additions to the Pantheon have been desserts. The Dark Chocolate Sea Salt Bar and Lemon Ginger Ice Cream, both reviewed by Russ and Sandy, were the latest sweet treats well-deserving of our elite-eats label. Out of the past five Pantheon foods, three have been desserts. And Sonia and I enjoyed the Raspberry Macaroon Cake enough to give it a 9 out of 10.

I think all four WG@TJs reviewers have a sweet tooth to some degree or another. I know I certainly do. So when I did our TJ's shopping this past week, I managed to make half of my purchases dessert foods, much to the chagrin of my wife, who is slightly more health-conscious than I am.

But anyway, these lemon bars, like the Macaron aux Framboises, come frozen, and they require a thawing time of approximately 45 minutes. They're fairly small, but they're heavy and rich. When I popped the first one into my mouth, I wanted to shout "Lemony Snicket!"

I'm aware that's the name of an author of children's books and not something to shout after eating a citrusy dessert, but it certainly seemed appropriate at the time. I then proceeded to refer to the desserts themselves as "Lemony Snickets." "Sonia, would you like another Lemony Snicket?" and so on. And indeed, they are quite lemony. They're highly sweet and extremely tart. Their texture varies greatly upon the amount of time they've been allowed to thaw. Right at 45 minutes seems to be the ideal time for consumption. Before that, they're too cold and icy. Wait too long after that, and they get very mushy, to the point you can't eat them without getting messy or using a spoon, especially if it's hot out.

There was a curious sheet of white confection on the top of each piece. It was like a very thin layer of powdered sugar or something. It dissolved on the tongue instantly, and it was very sweet. Occasionally, the sheet would frustrate me by sliding off the lemon bar and landing on the floor or my lap, at which point it became nearly impossible to salvage intact.

I felt the bars had a nice balance of tart lemoniness and sugary sweetness. Sonia agreed. She pointed out that the bottom cake-ish layer could have been a bit firmer. It tasted great, but it was quite flimsy, especially once it had been thawing beyond an hour or so. The custard section was very creamy and good. Just what I was hoping it would be. We're going to give these lemon bars double 4's. I'd say they're a must-try for lemon-lovers.