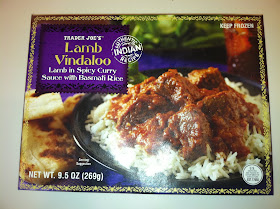 Trader Joe's Lamb Vindaloo. As you can see, it's another frozen Indian entree that Trader Joe's has concocted for us. That means one thing if you want to eat it for lunch: a microwave. Hmm, microwavable lamb. As one of our fans aptly said, that's kinda a scary notion, so it was with a little bit of trepidation that I bought this for myself. Sandy though? She was all about giving it the old college try. Nuked peppers scare her off. Nuked lamb bits don't. Go figure. Lamb might be her favorite meat after bacon, so I'm sure that has something to do with it. We've tried pretty much every other Indian offering fom Trader Joe's, so we were hoping it'd be good

Tell ya what: it's different from all the other Indian dishes, and that's a good thing. As much as I'd enjoyed the different curries and tikka masalas and all, to me, after a bit, they began to taste very much the same with only a little differentiation between them all. Not the lamb vindaloo. I love spicy foods and have a higher tolerance for capsaicin-driven cuisine then just about anyone I know; where most of the other Indian dishes registered maybe a four on my 1-to-10 spicy scale, this registered a good solid 8. It didn't make me misty or anything, but it did my nose run a little, and had me plenty thirsty at the end. The sauce was red and rich and savory and had a good burn to it. This is definitely the spiciest thing I've bought yet from Trader Joe's. Loved it. The rice on the side, of course, was nothing special until some excess sauce (of which there was plenty) got involved.

The lamb, though? For what was there, it was surprisingly good, I thought. I got three decent sized chunks, and each bite wasn't fatty or stringy or gristly at all, but instead tender, juicy, and roasted to just about right. I haven't had much lamb in my life, but still, it struck me as good lamb. The down part? Well, just like pretty much every other Trader Joe "meat and something else" product, there wasn't enough of it. I've heard it said that a serving of meat equals something the size of a pack of playing cards (standard ones, not, as much as I would like it to be, those mega ones I swear Bob Barker had but couldn't find a picture of). The three bites I had, judging fairly, eq 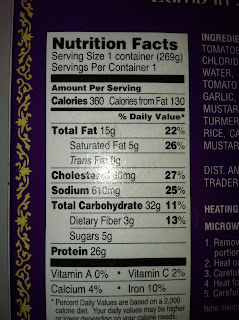 ualed maybe 2/3s of a deck. C'mon, I had an afternoon of insurance fustercluck solving ahead of me, I need me some more red meat than that some days, TJ's.

Anyways, before we get to the final wrap-up, you may notice the second picture I have put in this review. Some fans have requested nutritional info on the items we review. As a pharmacy employee (i.e., someone with a vested interest in having as much of the population on Lipitor as possible) and not a nutritional expert by any means, I don't feel too qualified to break it all down. I can, however, take a picture of the nutritional label and have you, the reader, decide if it's something you'd want to try or forego, figure out Weight Watcher points, rally against sodium, etc. I'll make it a point to include a picture of the label in all my posts going forward, and as I have time (and as I repurchase things), update some of the older posts, too.

Okay, let's wrap ths up. Sandy absolutely loved this. She had it for a work dinner last week, and when I picked her up, she raved about it all the way home. Sandy said the lamb was on par with a lot of other times she's had it, and loved all the spices. Like me, though, she didn't love that there wasn't quite enough of it, which was what knocked it down to a 3.5 for her. That seems a little low to me, but yeah, there isn't enough lamb, which makes the $3.99 price point seem a little high. Knock a little off the price, or better yet, sneak in just a couple more bites of tasty lamb meat, and it'll do better than the 4 I'll bestow upon it.