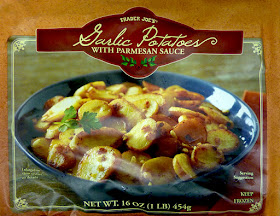 Things I love about garlic: it tastes good, it's good for you, it repels vampires. Things I don't like about garlic: its nickname is apparently "the stinking rose," too much of it can cause an upset stomach, it makes your breath bad.

But have you ever noticed that when you AND the person you're kissing have recently eaten garlic, you can't really tell that they have bad breath because yours is exactly the same? It's like they cancel each other out. That's why Sonia and I always have garlic at the same time.

"Hey Sonia, I'm eating some of these garlic potatoes, do you want some?"

Sonia will be the first one to tell you that she has a poor sense of smell. But garlic is just one of those scents that's pungent enough to punch through the poorest of olfactory appendages. So we both had some. Not that we made out while we were eating or anything. Even though the garlic-breath situation wasn't an issue, I just have this thing with kissing while eating. You remember that scene in Good Will Hunting when Matt Damon and Minnie Driver kiss at that diner, and Minnie Driver's character says, "I just got some of your pickle" or something like that? NASTY. I almost hurled. I don't even want to take the slightest chance of ingesting food that's been masticated by someone other than myself, even if it is my wonderful wife.

Anyhow, on with the review of the potatoes. We've seen TJ's do LOTS of stuff with potatoes. Everything from Russ's beloved Potato Tots to Trader Joe's Breakfast Scramble, TJ's has generally done more right than wrong with their potato dishes. Of all the items I've had from Trader Joe's that involve potatoes, I would say these are most similar to the potatoes in Trader Joe's Meat & Potatoes, but with more garlic, of course. But actually, not much more. The garlic in this product was certainly not overpowering. It's a subtle garlic flavor. They're a little salty, but there again, it's not overpowering at all. The product mentions parmesan in the title, but neither Sonia nor I tasted much, if any. And, well, the only flavor that's left is potato. You could certainly tell that you were eating potatoes, but they weren't bursting with flavor of any kind. They went well with ketchup...but, they really needed the ketchup if you know what I mean.

All in all, this is not a good stand-alone food. Even as a side-dish, most people will still want to dress it up with ketchup and maybe a little salt. The texture was nice. Similar to home-fries. No complaints there. But because these are little more than plain potatoes in a bag that you could chop up and cook yourself, Sonia is giving them a 2.5. I thought they were convenient, and they certainly didn't taste bad...their flavors were just kinda subtle. I'll be generous and give them a 3.5.