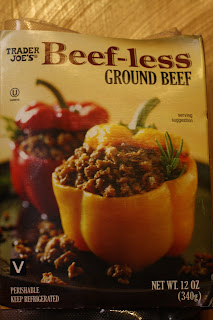 Nathan sure was right a few posts back. We really do like our desserts, and probably from the looks of me, a little too much. I guess it's not that surprising that Trader Joe's, in my estimation, has a lot of tasty sweets. But tasty fake meats? I'll admit it, as an avid carnivore, that's a shocker. There's the soy chorizo, the first item I ever reviewed for this blog, and still an every-trip pick up. The veggie sausage turned out a winner, even over the more famous national brand. Heck, I don't even really like corn dogs all that much, but the Trader Joe's Meatless Corn Dogs? Sandy and I got them a couple weeks ago, and dang it...tasty. Good call, Nathan.

So...Trader Joe's Beef-less Ground Beef. Once we saw it, based on our good fake meat history, Sandy and I figured it'd make a worthwhile purchase, despite its problematic name a la the soy chorizo. This time, it's all English, no fun with Spanish. See, the "Beef-less" kinda cancels out the "Beef" part of the equation, leaving this as simply "Trader Joe's Ground," as in, like, dirt. So, buying something that kinda resembles dirt, and its label practically says it's as much, so as I began m

aking it the other night I was sure hoping it'd be something more suited for my belly than our garden out front.

Tell ya what: I don't think it's as good as the other fake meats listed above, but still, it's pretty decent. It comes fully cooked and vacuum-packed so for some quick tacos after a babysitting night, it made an easy choice. Consistency-wise, it's not quite regular ol' ground chuck, but it crumbled up okay enough, and I suppose it's moist enough that one could attempt to make meatballs and burgers out of it. Still, it's kinda obvious that it's fake when you chomp in. Rubbery or chewy or smushy isn't the right word...just fake-ish. But, the beefless beef tastes alright. It definitely comes a little seasoned on its own, but not overly, so it's the kinda thing to do with what you will. I think Sandy and I would be up for trying it out in some lasagna or try to make meatballs or do whatever else we want to the next time we go on some crazy meat-free kick.

Anyways, if you're making tacos when it's late and 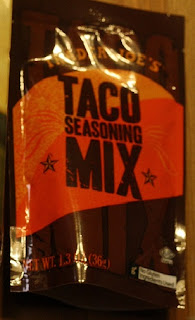 you're hungry, you need an easy way to spice up your carne dementira. So why not some Trader Joe's Taco Seasoning Mix? I'm usually the type who likes to spice my own meat and chili and all however I see fit by grabbing whatever off the spice rack and going all Bobby Flay on it so I'm kinda anti pre-made spice packs. I picked up a pack a weekend or two ago for making some homemade white chicken chili, though, because I wanted to pay some more attention to the pierogi I was also making, and man, that was good chili (even Sandy liked it!). And somehow I found another packet in my pantry, so I figured, why not for our tacos. This is some good good spicy stuff. It's heavy on the cayenne and chili pepper, with a good dash of black pepper, too. In other words, my kinda mix, except I didn't make it. It's definitely spicy, although, naturally, a little too heavy on the seasoned salt and salt in general.

In all, our tacos 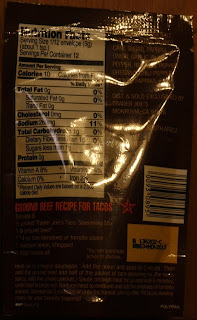 were pretty good and hit the spot while we caught up on "Glee." Yes, I watch "Glee," with my wife, so she'll let me watch football every once in a while with minimal grumbling...sometimes. It's not like I kinda sorta like the show or anything...but some of those kids got talent...okay, back to fake spicy meat. Sandy gave the beefless beef a three, mostly for texture concerns, while she really didn't say anything much about the seasoning mix except to say "mmm...spicy." I guess that means a four from her. Let's see, for me, I'll go with a 3.5 for the fake beef, I think, and perhaps another 3.5 for the taco seasoning mix. I kinda liked them both but for the beef, it just wasn't quite all there enough somehow, and I just like my own random spice combos over some prepackaged deal, however good it may be. In all, not bad for a quick fix, but sometimes the real deal just has to win.