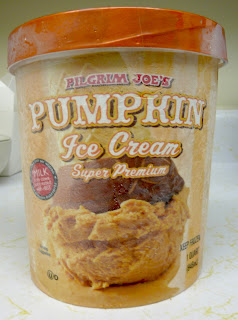 I bet Miles Standish, John Alden and the gang didn't have anything like this at the first Thanksgiving. They were just figuring out how to grow crops and take shelter in the New World, and I'm pretty sure the establishment of the Plymouth Rock Creamery took a back seat to surviving and whatnot. Nevertheless, the recipe for this colonial treat was apparently passed down from Pilgrim Joe to his descendent, Trader Joe, who has decided to offer this holiday treat to all of us.

I know, I know. It's a little early for Thanksgiving stuff. But really, pumpkin season begins in October—what with "Joe-o-Lantern" carving and pumpkin patches and the advent of the Great Pumpkin, etc. I've been enjoying pumpkin seeds, pumpkin cookies, pumkin pie and pumpkin ale since the beginning of the month. And Russ, incidentally, has been enjoying other season-appropriate foods such as pumpkin pancakes.

Despite my acceptance of all things pumpkin, I was sort of reluctant about this ice cream for some reason. Maybe it's because I recently tried Trader Joe's Lemon Triple Ginger Snap Ice Cream that Russ reviewed a little bit ago, and I knew that no other ice cream could possibly follow such an outstanding flavor. Wow. Yes, the lemon ice cream is THAT GOOD.

And sure enough, I'm just a little disappointed with this pumpkin flavor. It's certainly not that it tastes bad. If you like pumpkin-flavored desserts, you'll like this. I guess what I was pining for was a bit more in the texture department. It's just ice cream. If they would have thrown in some pumkin pie pieces, I think they could have nailed it. The bread/crust part of pumpkin pie really rounds out the creamy pie-filling and makes it a total dessert. Eating this ice cream, for me, was not unlike eating a bunch of cold pie filling by itself. Not terrible, but it could absolutely be improved by some additional textures and complementary flavors.

It's very pumpkinny. It's got the traditional spices, like nutmeg, that you'd want in a pumpkin-based dessert, and it doesn't taste fake...and it's not at all bland. This is another food that I kind of feel like a jerk for not giving it a great score. Because it is a great product. I just feel like it could have been even better. I've been spoiled by treats like the lemon ginger snap and Ben & Jerry's, which generally have a bunch of other yummy foods blended seamlessly into the ice cream.

In light of what it could have been, I give it a 2.5. Sonia was pleasantly surprised (and, she wasn't as impressed with the lemon ice cream, either) so she gives it a 4.